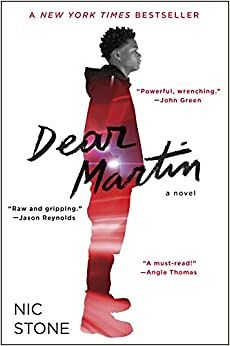 Please join us to meet, listen, and learn from author of award winning teen books like “Dear Martin” and the highly anticipated sequel “Dear Justyce”, Nic Stone. This event will be for teens only on Zoom. Please register and you will receive a Zoom link on the day of the event.

ABOUT ‘DEAR MARTIN’ (School Library Journal): Justyce is an African American teen caught between two worlds. He knows that the education he’s receiving at a private school will grant him more economic opportunities, however he begins to question the effects his private school education on his own identity. Some of his classmates believe that the racial pendulum has swung too far, giving African Americans an unfair advantage over their white counterparts. The kids he grew up with believe Justyce has assimilated too much and has forgotten where he came from. He questions his blackness, his relationship with his biracial girlfriend, and his attraction to his white debate partner Sarah Jane. Through a series of journal entries, Justyce attempts to figure out his place in the world by exploring the life of Dr. Martin Luther King. A violent altercation between a retired white police officer and his best friend causes Justyce to examine what it means to be an African American male in 2017. The length and pace of this well-written story make it a perfect read for reluctant and sophisticated readers alike. The main characters are well balanced and will resonate with teens. However, the voice of African American women is largely absent from the narrative. The characterization of Justyce’s mother and his girlfriend are one-dimensional compared to some of the other protagonists. Still, this important work should be read alongside Jason Reynolds’s and Brendan Kiely’s All-American Boys and Kekla Magoon’s How It Went Down. VERDICT An good choice for school and public libraries.—Desiree Thomas, Worthington Library, OH