Conversation With Robert Voker, Author of ‘Hidden Valley Road: Inside the Mind of An American Family’ (Enoch Pratt Library) – VIRTUAL 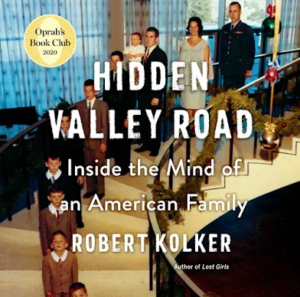 The program is presented in partnership with NAMI Metropolitan Baltimore. Robert Kolker (Author of ‘Hidden Valley Road’) will be in conversation with Dr. Karen L. Swartz

ABOUT ‘HIDDEN VALLEY ROAD’: Don and Mimi Galvin seemed to be living the American dream. After World War II, Don’s work with the Air Force brought them to Colorado, where their twelve children perfectly spanned the baby boom: the oldest born in 1945, the youngest in 1965. In those years, there was an established script for a family like the Galvins–aspiration, hard work, upward mobility, domestic harmony–and they worked hard to play their parts. But behind the scenes was a different story: psychological breakdown, sudden shocking violence, hidden abuse. By the mid-1970s, six of the ten Galvin boys, one after another, were diagnosed as schizophrenic. How could all this happen to one family?

What took place inside the house on Hidden Valley Road was so extraordinary that the Galvins became one of the first families to be studied by the National Institute of Mental Health. Their story offers a shadow history of the science of schizophrenia, from the era of institutionalization, lobotomy, and the schizophrenogenic mother to the search for genetic markers for the disease, always amid profound disagreements about the nature of the illness itself. With clarity and compassion, bestselling and award-winning author Robert Kolker uncovers one family’s unforgettable legacy of suffering, love, and hope.

Register through EventBrite for reminders. Click here to register, tickets available 9am on September 30.

Karen L. Swartz, M.D. is the Director of Clinical and Educational Programs at the Johns Hopkins Mood Disorders Center and an Associate Professor in the Department of Psychiatry at Johns Hopkins.  She received her B.A. from Princeton University and her M.D. from Johns Hopkins.  She completed her residency in psychiatry at Johns Hopkins Hospital in 1995 where she served as Chief Resident.  She is the founder and director of the Adolescent Depression Awareness Program (ADAP), a school-based program designed to educate high school students, faculty, and parents about adolescent depression.  In its 21st year, the ADAP curriculum has been taught to over 115,000 high school students.

Visit https://www.theivybookshop.com/ to order your copy of Hidden Valley Road.

Writers LIVE programs are supported in part by a bequest from The Miss Howard Hubbard Adult Programming Fund.