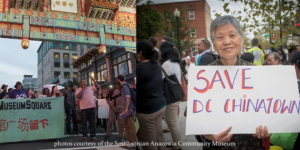 Once a vibrant Chinese immigrant neighborhood, Washington, DC’s Chinatown is today a bustling business and entertainment district with only about 300 remaining Chinese American residents. While Chinatown first formed in the late 19th century on Pennsylvania Avenue within view of the Capitol Building, it was displaced for the construction of federal and municipal buildings around 1930. After relocating to near 7th and H Streets NW, a new Chinatown grew, but faced continued challenges from major development projects in the decades that followed.

In conjunction with the Smithsonian Anacostia Community Museum’s “A Right to the City” exhibition, this program will include a short documentary film screening, followed by a discussion with Chinatown community members, and an hour-long walking tour of the neighborhood, led by Smithsonian curator Samir Meghelli.