⭐ Meet Yaba Blay, Author of ‘One Drop: Shifting the Lens on Race’ In Conversation With Imani Perry (Free Library of Philadelphia) – VIRTUAL 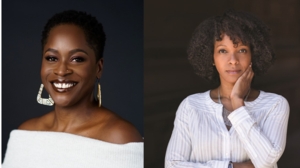 Referred to by Michael Eric Dyson as “one of the most brilliant and committed critics and advocates writing and thinking and working on behalf of Black people today,” Dr. Yaba Blay is a scholar, activist, and cultural consultant. Focusing on Black women and girls through topics like personal identity and body image, she has launched a number of viral media campaigns, produced the CNN documentary Who is Black in America?, and is an internationally renowned public speaker. Her work has appeared in publications such as the New York Times, Essence, and EBONY, and she has appeared on CNN, BET, and NPR, among other media outlets. In One Drop, Blay questions conventional perceptions of Blackness in order to create and understand a more diverse worldwide community.

Imani Perry is the Hughes-Rogers Professor of African American Studies and faculty associate in the Program in Law and Public Affairs and Gender and Sexuality Studies at Princeton. She is the author of six books, most recently the award-winning titles, Breathe: A Letter to My Sons and Looking for Lorraine: The Radiant and Radical Life of Lorraine Hansberry.